[[]] Aldnoah Drive
Octantis (オクタンティス, Okutantisu?) is a Martian Kataphrakt that appears in the ALDNOAH.ZERO television series. It is piloted by Count Barouhcruz, an Orbital Knight.

The main offensive capability of this Kataphrakt is its slicing power by using the ultra high-tension mono-filament wires spooled around superconducting electromagnetic bobbin on each hand. The bobbins are powerful enough to cut through asteroids and UEF's Kataphrakts in one hit.

The Octantis is not invulnerable to bullets, unlike most of the other Martian Kataphrakts, as shown during the final space battle where one of its hands was disabled by damage sustained from UEF's forces. However, the wires on its hands can be utilised defensively by spinning them rapidly in a circular motion to act as shields to defect bullet rounds from UEF's Kataphrakt forces. 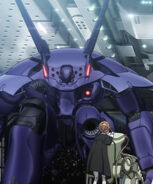 The Octantis in battle.

Retrieved from "https://aldnoahzero.fandom.com/wiki/Octantis?oldid=16813"
Community content is available under CC-BY-SA unless otherwise noted.