View source
watch 01:36
We're Getting Mutants in the MCU - The Loop
Do you like this video?
Play Sound

30 Detachable Mobile Laser Guns
Herschel (ハーシェル, Hāsheru?) is a Martian Kataphrakt that appears in the ALDNOAH.ZERO television series. It was originally the personal Kataphrakt of Count Marylcian, an Orbital Knight. The Herschel was later given to and piloted by Sir Harklight, also an Orbital Knight.

The Herschel is equipped with a Laser Rifle, as well as 30 Detachable Mobile Laser Guns (DMLGs) that can move as fast as, if not faster, than the Herschel itself. This endows the Herschel with an overwhelming advantage in Kataphrakt space battles, as the 30 mobile guns can quickly surround the Herschel's opponent and attack from all directions. Even the Tharsis, with its precognitive abilities, could not avoid being hit and Slaine was mostly on the defensive during his duel with Marylcian.

Each mobile laser gun also comes with a grip, allowing it to be used by the Herschel like a normal weapon.

However, it is implied that the Herschel is meant specifically for long range combat, and is weak against close combat and in enclosed areas. This was shown when the Tharsis was able to swiftly defeat Marylcian after getting close enough inside an abandoned supply shaft near the Moon Base, as Slaine was able to shoot down the Herschel's DMLGs easily with all of them being forced to attack from one direction and unable to encircle him.

When not in use, these weapons are stored in the Herschel's shoulders and legs and get ejected when they need to be used. Each of them comes with a single weapon pointing forward, a number of maneuvering thrusters, and a grip so it can be used as a normal weapon as well.
Its great weakness is that they cannot shoot accurately when doing reverse thrust. They are also not very durable, so they are ill-suited for combat in a confined space. Also, since the firepower they have individually is not that great, the Herschel is essentially helpless if its mobile weapons are shot down.

The Herschel was originally owned by one of the Orbital Knights named Marylcian, who used Herschel to duel against Slaine's Tharsis in a fight to determine who shall have the rights to personally guard 'Princess Asselyum'. The duel in space ended when Tharsis beheaded the Herschel. Due to the Herschel's head being linked to the pilot cockpit, Marylcian was sucked out into the vacuum of space. The Herschel had suffered very minimum damage, and was later repaired and given to Slaine Troyard's subordinate, Harklight, who was very honored to receive it. Although it was shown attempt it's last assault on the Deucalion and its accompanying Areions, the Herschel's status is unknown. 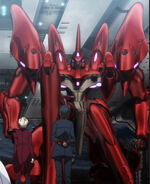