Dioscuria II (ディオスクリア II, Diosukuria II?) is a Martian Kataphrakt that appears in the ALDNOAH.ZERO Second Cour television series. It is piloted by Count Saazbaum, an Orbital Knight. The Dioscuria II is exactly the same as the Dioscuria, however, the place its barrier gap had been, was moved.

The Dioscuria is equipped with multiple Aldnoah Drives that allows for it to create a Dimensional Barrier, Blade Fields, to make its arms into Rocket-propelled Fists that can become a single molecule, and to allow it the ability to combine its different segments. (AZ: "Childhood's End")

The Dioscuria with its superior flight capabilities is able to manoeuvre throughout space and the atmosphere of the Earth. The Dioscuria is also capable of splitting itself into 3 separate mechas, one main body and two identical detachment mechas. Each separate mecha is also equipped with flight packs in order to retain aerial superiority.

Additionally, it seems to have stealth capabilities, allowing it to approach undetected and intercept encrypted transmissions.

The Dioscurias' barrier can absorb light, yet the pilot requires external cameras in order to see his surroundings as long as the barrier is up. The Dioscuria controls eight cameras at any given time, which can fly anywhere within a limited range, allowing the pilot to get a bird's eye view of the whole battlefield. The cameras are small and may be undetectable to the naked eye.

The "Complete" Dioscuria has the ability to transform into a plane-like spacecraft. In this form, the Dioscuria possess impressive flight capabilities and is able to manoeuvre throughout space and the atmosphere of the Earth.

The Dioscuria can detach parts of itself to create separate Aircraft/Mecha for combat. These identical, detachment mechas are mostly formed from the "Complete" Dioscuria's forearms, meaning that the detachment mecha can use a smaller version of the blade field. While the two mechas are detached, the Dioscuria is unable to use its special abilities such as the dimensional barrier, rocket-propelled fists, and blade field.

The Dioscuria can detach parts of itself to create flight packs for each part of its separated form in order to retain aerial superiority even when split. The main body stands on its flight pack which is flat and hovering board like, while the Mecha-detachments ride their flight packs in a motorcycle like fashion .

When the main body of the Dioscuria is on the ground, it can use a thruster pack for nimble movements just like the one used by the Tharsis, and it could be used to easily evade heavy fire from multiple Terran Kataphrakts. However, instead if relying on melee weaponry while using the thruster pack, the main body of the Dioscuria relies on missiles or machine guns on its flight pack.

In its "complete" form, the Dioscuria can activate a dimensional barrier, which is a unique characteristic inherent of the Nilokeras. However, it has the same weaknesses: there needs to be a gap in the barrier to allow the aerial cameras to transmit visual information to the Kataphrakt; the barrier also cannot be raised along the ground otherwise the Kataphrakt won't be able to stand, but this makes it vulnerable to mines or explosions near its feet.

The dimensional barrier also interferes with the Blade Field and the Rocket propelled fists and must be completely turned off for those to be used.

When combined with its detachments, it can utilize the rocket-propelled hardened fists, which is a unique characteristic inherent of the Hellas. Each fist is condensed into a single molecule when launched, making them almost impervious to all attacks, the only vulnerable part being the rocket propellers at the back of the fists.

The Dioscuria II was having its final preparations made before the Skirmish at Trident Base, and it was transported from the Moon Base to Marineros Base. (AZ2: "The Beautiful and Damned")

Count Saazbaum piloted the Dioscuria II against Inaho Kaizuka along with Sir Slaine Troyard in the Tharsis. During the battle near Marineros Base the first set of high speed projectile fire damaged the Dioscuria, however the second set hit and destroyed the Dioscuria II, killing Saazbaum along, all of which was meant for Inaho. Although Slaine originally intended the trap for Inaho, he still allowed Saazbaum to perish in the unintended attack as vengeance for the attempt on Asseylum's life. (AZ2: "Toll for the Brave") 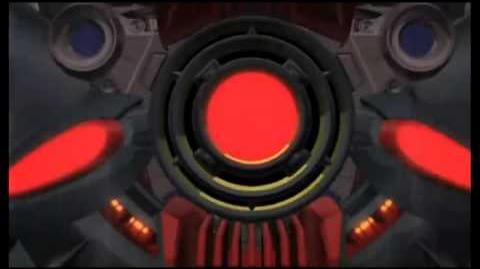 The Dioscuria in its Flight Mode.

The same aerial cameras used by the Nilokeras.

The new gap for the Dioscuria II's barrier.

Retrieved from "https://aldnoahzero.fandom.com/wiki/Dioscuria_II?oldid=17013"
Community content is available under CC-BY-SA unless otherwise noted.