Tharsis
Count Cruhteo (クルーテオ 伯爵, Kurūteo-Hakushaku?) is a character that appears in the ALDNOAH.ZERO television series. He held the title of Count as a member of the Orbital Knights and piloted the Martian Kataphrakt Tharsis during the Second Earth-Mars War.

Count Cruhteo is an extremely proud individual. He strongly believes in the strength of Vers and its people, which is part of the reason why he treats the Terrans so horribly. He is also loyal to the Royal Family of Vers. Cruhteo seems to respect those who are loyal and do not give up.

1 of 3
Add photo
He tries to dissuade Princess Asseylum from her goodwill visit to Earth, and converses to Count Saazbaum who foreshadows the coming event. After the attempted assassination on the her life, he supported an invasion of Earth. (AZ: "Princess of VERS")

He landed his Landing Castle in Tokyo, hoping to be the first to investigate Princess Asseylums apparent death. He was convinced by Sir Trillram to let him be the one to plant a flag on the location of the assassination as a symbolic gesture. In reality, Trillram wanted to cover up the truth, so that he could silence the "rats" who conducted the assassination from ever telling a soul. (AZ: "Beyond the Horizon")

Upon Slaine Troyard's return, Cruhteo was shocked to hear of Trillram's death and asks how he died. (AZ: "Point of No Return")

When an armistice is issued Cruhteo becomes very agitated, as Emperor Rayregalia Vers Rayvers's own "flesh and blood" was killed. (AZ: "Phantom of the Emperor")

Cruhteo learns of Slaine using the audience chamber and issues an order for his execution however Slaine escapes on board a stolen Sky Carrier. Angry he says he wants him captured and executed, but is stopped by Saazbaum as he wants to know where Slaine intends to go. (AZ: "Steel Step Suite")

He is later seen when Slaine is being tortured for information while he and Saazbaum watch after several shocks and beatings Slaine refuses to speak so Cruhteo tells him to speak and he will put him out of his misery by shooting him, Slaine does not answer so he orders his men to continue the torture. After Slaine tells him he is exploiting Asseylums' death to crush her dream of peace, Cruhteo becomes enraged and orders his men to kill Slaine despite Saazbaum telling him not to. Saazbaum leaves the camera with a grim expression before Cruhteo hits Slaine, knocking him out of his shackles. Slaine tells Cruhteo that Trillram was a traitor and that he had shot him, that Trillram being killed in the meteor bombardment was a lie and hints that the princess is still alive. Slaine also says that the princess will stop his plans before losing consciousness. Speechless, Cruhteo figures out that Princess Asseylum is alive he tells his men to tend to Slaine's wounds and says Slaine has proved his loyalty one-thousand times over and swears he will oust the traitors who made an attempt on the princess's life. He orders his bridge to offer a cease fire with the UFE to find the princess, but his castle is attacked by Count Saazbaum in his Martian Kataphrakt Dioscuria. Cruhteo then realizes that Saazbaum is the traitor and then tries to summon his Tharsis but he is hit by the Dioscuria's blade field vaporizing him, killing him instantly. (AZ: "Then and Now")

Cruhteo and Sazzbaum seem to be more acquainted with one another as Orbital Knights than the other Martian Knights.

He had been a guest of Cruhteos' for many years. This gained him enough trust to be sent out into battle at Trillrams request. Cruhteo later regretted the loss of Trillram who is said to have fallen in battle, having been caught in the meteor bombardment launched at his territory.

Cruhteo shows a lot of hate towards Princess Asseylum's best friend as Slaine was born on Earth. However, he holds great respect for Slaine's loyalty to the princess.

He is an Orbital Knight like his father, however he doesn't seem to hate it. 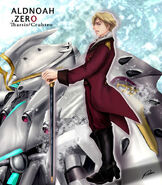 Retrieved from "https://aldnoahzero.fandom.com/wiki/Cruhteo?oldid=16806"
Community content is available under CC-BY-SA unless otherwise noted.