The most commonly seen Kataphrakt belonging to the United Forces of Earth is the KG-7 Areion, yet the one used as the cover for ALDNOAH.ZERO is the KG-6 Sleipnir, an orange training unit that is equipped with a 75mm cannon with an attached grenade launcher, a pistol, and blade as sidearms. The Areion is a Kataphrakt built by Earth and is revealed to be more powerful than the Sleipnir. Although both are outclassed by the Martian Kataphrakts, the majority of Earth's weapons follow this trend, being second-rate compared to their Martian counterparts. However, when used with a well-planned strategy, even a training unit such as the Sleipnir can defeat a Martian Kataphrakt. They all use an operating system called ASIMOV.

The first Kataphrakt produced by the United Earth, but the series has been phased out and is mainly used as a training unit.

It is piloted by Sir Vlad. The Argyre utilized two "Beam Katana." It specializes in close-quarters-combat using a blade field as both an offensive and defensive weapon. The weapon can be used to easily slice through the heavy armor of any object with little to no effort, however, the armor of the Argyre itself is vulnerable to standard weapons. To combat this, the weapon is used to parry and deflect bullets through using the Leidenfrost effect causing high-explosive rounds to detonate and armor-piercing rounds to deflect off the field.

It is piloted by Viscountess Orlane. The Deucalion possessed the ability to manipulate gravity. It used that characteristic to generate a defensive field that was capable of bending gravity around the unit. It could seemingly float by using its gravity manipulators to keep itself in the air. By manipulating gravity around itself, the Deucalion could deflect any solid projectile.

It is piloted by Count Saazbaum. It can transform and combine from different attachments. It possesses the inherent abilities of the Nilokeras, Argyre, and Hellas. Each attachment has the ability to act independently, similar to the Hellas, but is far more advanced by combining each ability. As with the other Martian Kataphrakts, it also has the weaknesses they had as well.

It is piloted by Count Zebrin. It utilizes a barrier made of electricity that doubles as a weapon that can be used to surge toward targets, electrocuting them.

It is piloted by Count Keteratesse. It utilizes electrical beams that grasp and constrict enemy Kataphrakts.

It is piloted by Countess Femieanne. It possesses six arms named after the Goetian demons (Botis, Morax, Ronove, Halphas, Raum, Vine), which can be launched as rocket-propelled projectiles. They can become single molecules capable of piercing the armor of naval ships and other Kataphrakt's. Despite being heavily armored, they can easily be destroyed by targeting their rocket. Due in part because they use rockets and gain speed through distance, armor-piercing rounds can deflect them off course.

It is piloted by Baron Trillram. The Nilokeras possess' a dimensional barrier. Referred to as a "pill bug" by Calm Craftman, it can absorb or disintegrate any form of matter that comes into contact with its surface. The drawback of this defense is that the barrier also absorbs light, preventing the operator from seeing normally, for this is corrected by using aerial surveillance cameras. This, in turn, causes another drawback as a signal is received through an unprotected point along the Kataphrakts surface. Nilokeras also has a gap in its energy field on the soles of its feet, to keep it from disintegrating the ground under it and burrowing.

It is piloted by Count Selkinas. It possesses two plasma beam mounts on its head that can be used to create plasma beams that can cut through anything.

It is piloted by Baron Yacoym. It possesses the inherent characteristic that allows for it to create a 1 km radius Entropy Dilution Field. It saps the molecular motion of all matter. It creates super-low temperatures that can transform the air and freeze it. When bullets are fired at it, they enter a superconductive state, where then they are deflected by the Meissner effect.

It was originally piloted by Count Marylcian, but is now piloted by Sir Harklight. It possesses a Laser Rifle as well as 30 Detachable Mobile Laser Guns that can move as fast, if not faster, than the Herschel itself. This allows the Herschel to overwhelm others by quickly surrounding its opponent and attack from all directions.

It is piloted by Count Barouhcruz.

It is piloted by Count Orga. It possesses the ability to create multiple copies of itself, and not as holograms.

It is piloted by Countess Rafia. It utilizes optical camouflage that allows for it to make itself invisible, leaving no shadow or heat signature.

It is piloted by Count Mazuurek. 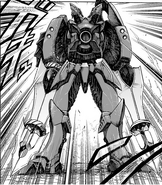