The series originally ran from July 5, 2014, for two cours. Both dubbed and subtitled versions of the first cour were available on Netflix in the USA until May 9, 2019.

Warning! Spoilers are ahead!

Fifteen years have passed since the Hyper Gate collapsed on the moon's surface. — A catastrophe known as the Heaven's Fall — The war between Earth and the VERS Empire of Mars is now in a cease-fire. The VERS' Princess Asseylum Vers Allusia descends upon Earth as an ambassador hoping to encourage reconciliation while some citizens are not willing to compromise. Inaho Kaizuka, a Terran high school student.. and Slaine Troyard, who swears his allegiance to Princess Asseylum... Their fates cross as both societies watch in horror as a missile crashes on Asseylum's motorcade. This incident marked the beginning of a new war.

The year is 2016— a year and a half after the assassination of Princess Asseylum. Despite his status as a Terran, Slaine has been granted the title of Mars Knight, is now served by his own personal subordinate, and has been taking part in battles against the United Forces of Earth. Meanwhile, on Earth, the Deucalion is finishing up its repairs as, one by one, the ship's former crew members return in order to proceed to a new battlefront.

The director of the anime is Fate/Zero director Ei Aoki. The anime features mechanical designs by Kenji Teraoka, who has worked on titles such as Mobile Suit Gundam 00 and Ghost in the Shell. The soundtrack is composed by the critically acclaimed Hiroyuki Sawano who has scored various anime such as Mobile Suit Gundam Unicorn, Guilty Crown, Blue Exorcist. The anime was written by Olympus Knights, among them the notorious Gen Urobuchi who previously worked with Ei Aoki on Fate/Zero.[1] Ei Aoki did the storyboard for the First Cour openings whereas Takafumi Hoshikawa did the storyboards for the First Cour endings.

See also: ALDNOAH.ZERO/Home Video The series originally ran for two cours; the First Cour began with episode 1 on July 5, 2014, and ended with episode 12 on September 20, 2014. The series resumed with the Second Cour with episode 13 on January 2015. Crunchyroll and DAISUKI simulcast the anime for viewers outside of Japan.[2][3]

A dub was announced by Aniplex of America on June 6, 2015. The recording was done at Bang Zoom! Entertainment. There were many voice actors from the dub of Gen Urobuchi's other mecha anime, Gargantia on the Verdurous Planet including Alan Lee, Geoffrey Chalmers, Julie Ann Taylor, Kirk Thornton, Matthew Mercer and Patrick Seitz. It is be distributed in the United Kingdom by Anime Limited[4]

The streaming of the dub of the Second Cour began on Netflix began on March 1, 2016.[5] 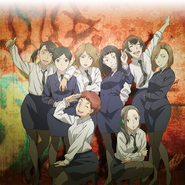 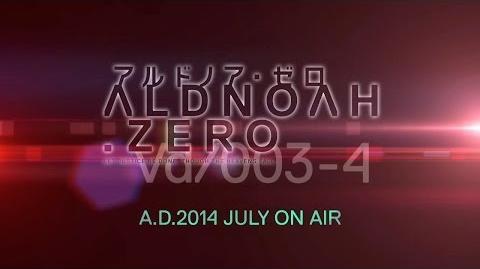 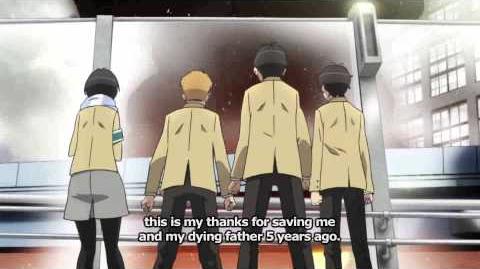 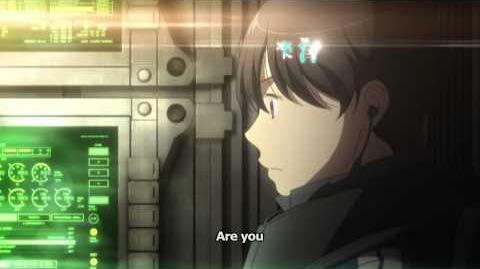 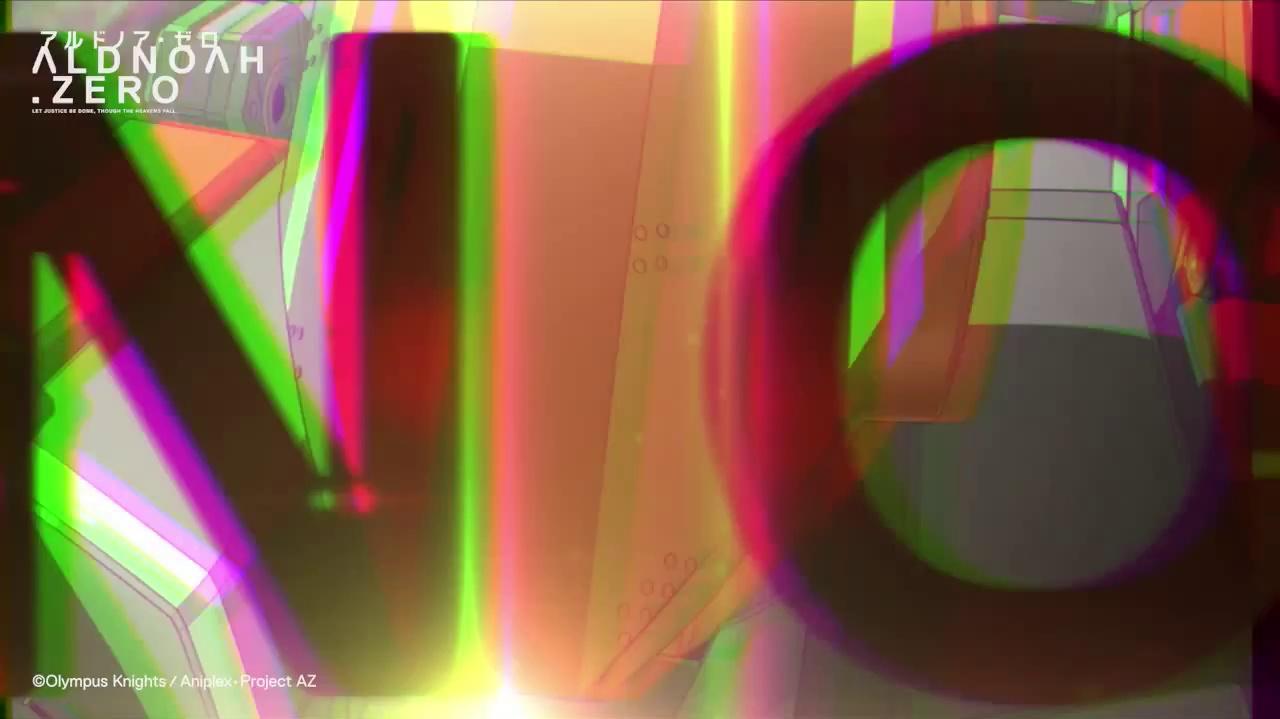 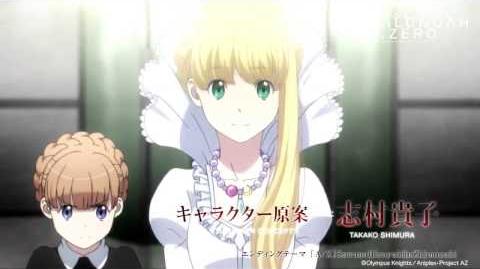 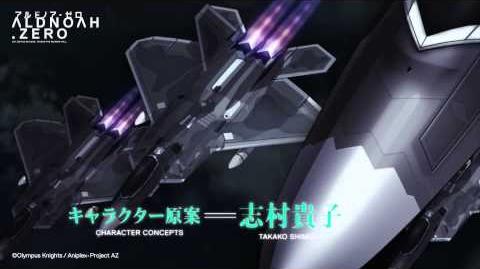 Vs/022 as seen outside Shinjuku Station East Exit [8]

Animedia magazine spread promoting ALDNOAH.ZERO episode 13 This Side of Paradise 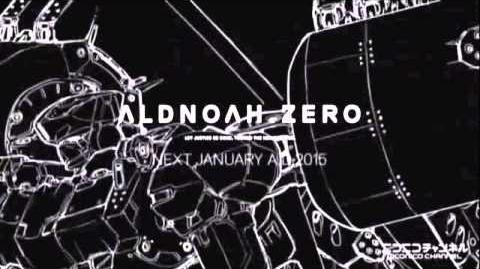 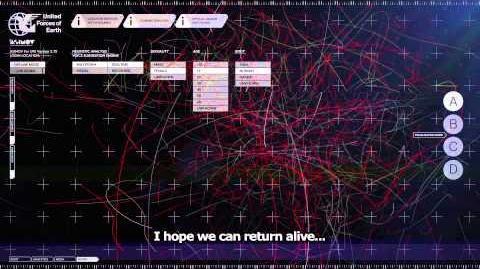 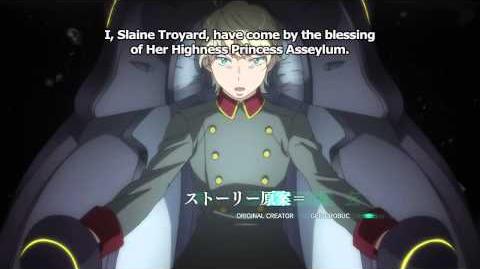 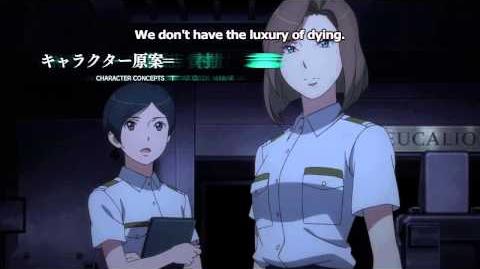 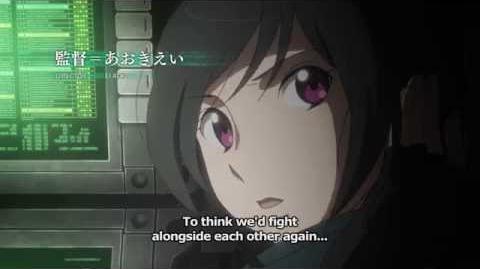 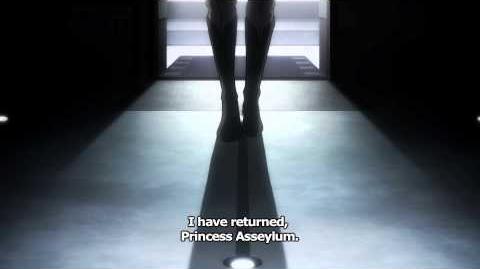